Wherever Harry goes he creates a positive vibe. Songs with heart and soul and great lyrics remind you of the better days of the sixties. Harry?s great voice in combination with the brilliant sound of his Landola guitars (Finland) and screaming harmonica?s sounds like Dylan in his best days.

Having his own regular shows in Europe and the United States. He started playing in the streets of London in 2001, he often performs for as Amnesty International, Warchild and other organizations against war and racism and injustice. He got connected with Brian Haw, the British Peace campaigner (Brian of Westminster), who occupied Parliament square till he passed away June 2011. Brian was a great inspiration to Harry, between 2007 and 2010 Harry performed his own Peace concerts at Parliament square to support Brian.

In 2008 Harry met Michael Bowen the famous Beat painter from SF. Michael and his friend Allen Cohen held the first Human-Be-In 14th of January ?67 SF Golden Gate park. The story is mentioned in Harry?s song; Dear Michael. Michael called Harry the messenger, and inspired Harry to write songs about ?2012? the new Summer of Love. In fact the first Human-Be-In, created the Summer of Love ?67.

In 2010 Harry was asked for a Bed-In for Peace in Eindhoven (NL) 3 days with a 24 hours broadcast on television (Studio Vlemmix). Harry decided only to drink water and eat dry bread for those 3 days. It was a great happening and it created a positive vibe among the viewers of the TV channel. The 15th of October Harry joined Occupy Amsterdam, and opened with his song ?Children of the world?, his Imagine version was a hit on You Tube. At X-mas time Harry visited many Occupy?s in the Netherlands (and in January 2012, London, UK) to give Love & Light concerts. (1000 lights in the night)

March 2003 Harry performed Love to All the People during a protest against the attack of Iraq in front of more than 80,000 people on the Dam Square in Amsterdam (NL) 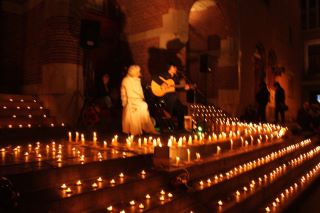 "WE GOT TO DO SOMETHING !"
HARRY LOCO writes his own songs and plays a lot of Bob Dylan-songs.